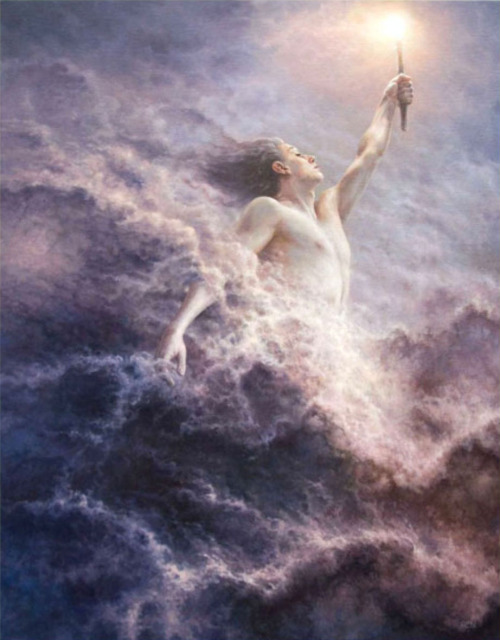 HYPERION is the Titan god of heavenly light, one of the sons of Ouranos (Heaven) and Gaia (Earth), and the father of the lights of heaven — Eos (the Dawn)), Helios (the Sun), and Selene (the Silver Moon). He pulled them forth from his dying wife Theia and cast them into the sky where they still persist and watch over the their dead mother’s form hanging in the void. Hyperion’s name means “watcher from above” or “he who goes above.”

Hyperion was one of four Titan brothers who conspired with Kronos to castrate and depose their father Ouranos. When He descended to lie with Gaia, Hyperion, Krios , Koios and Lapetos — posted at the four corners of the world — seized hold of their father and held him fast while Kronos castrated him with a sickle.

These four Titans are the great pillars holding heaven and earth apart and the entire cosmos aloft As the father of the sun and dawn, Hyperion is regarded as the Titan of the pillar of the east. His brothers Koios, Krios and Lapetos preside respectively over the north, south and west.